People camp on the Yaohua waterfront in Greenland in Shanghai.

Nicky Li was excited about her first urban camping experience in Shanghai.

She booked a campsite at the redeveloped Yaohua Waterfront Greenland in Pudong New Area when she heard news that the park allowed people to set up tents.

It was a wise decision.

Over the weekend, more than 90 percent of the campsites in the East Bund area, Pudong’s Huangpu Waterfront, were booked.

“Fortunately, I made a reservation three days in advance,” she said. “We were able to find a good place to sit in the dappled shade and enjoy a wonderful view of the Huangpu River.”

For a long time, it was only a makeshift nursery for growing seedlings. In 2017 it was converted to greenland, but the environment was still unwelcoming, with sparse lawns and scattered trees. In the fascinating Eastern Bund, it seemed a bit out of place.

“The waterfront was walled up and there were only weeds around,” said Ma Zhifei, an official with the Pudong Waterfront Greenery Management Department. “In a nutshell, it was a boring, boring path, not worth a look.

“But the waterfront is a precious resource. We felt we needed to take advantage of this precious land and give the public a beautiful open waterfront.” 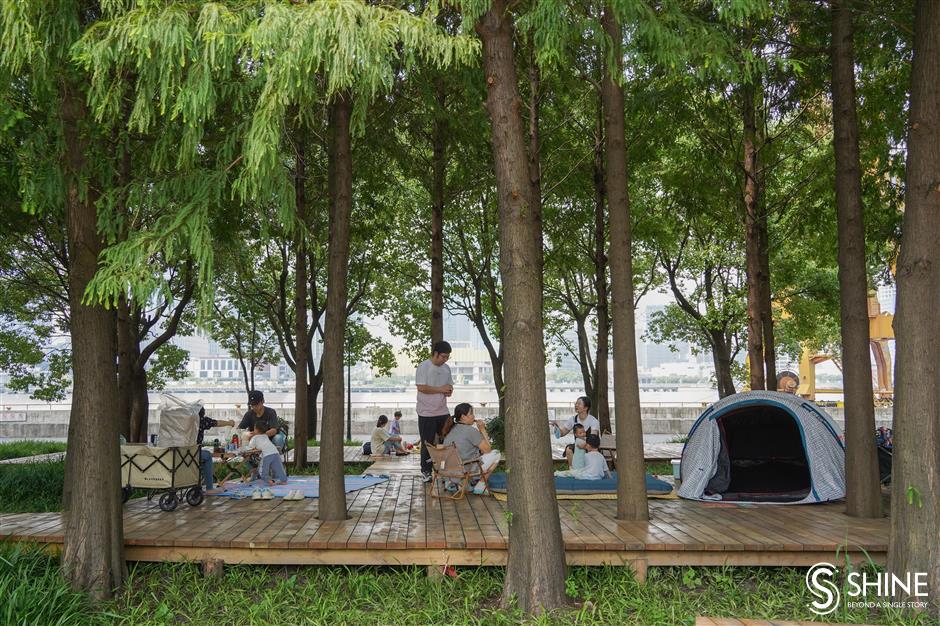 After a three-month facelift, it reopened to the public in mid-August, becoming the first and only “tent park” on the Huangpu waterfront.

Tens of thousands of square meters of ground cover, trees and flowers have been planted to create diverse natural landscapes such as wetlands and flower beds.

About 7,200 square meters of wooden trails and plank docks meander, offering 200 campsites for people to pitch tents, sit in the dappled shade, and enjoy beautiful views of the Huangpu River.

Next to it, recreation games such as hopscotch are painted on plain floors. They echo the environment and bring the neighborhood to life.

It turned out to be popular.

In two months, the official Greenery WeChat (gh_7d0d8a04b382) has attracted nearly 30,000 subscribers and received nearly 4,000 online appointments, according to the Pudong Office of Ecology and Environment. 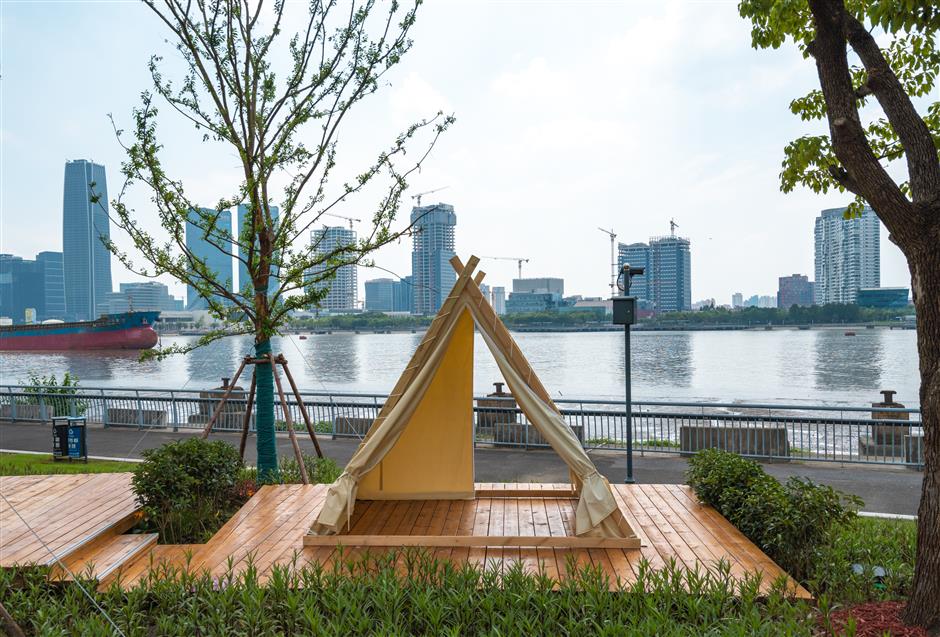 The growing popularity of camping

During the National Day in early October, posts with hashtags for camping on China’s popular life-sharing social media platform Xiaohongshu, also known as Red, were up 1,116% from to a year ago.

In a sharper contrast, camping bookings for the Mid-Autumn Festival in September were up by half compared to the Dragon Boat Festival, which had been celebrated three months earlier, according to China’s leading online travel operator. Trip.com.

In metropolises like Shanghai, resort-style urban camping has become a popular option for weekend getaways as city dwellers go green. It offers an opportunity to get closer to nature with easy access, without the need to travel to remote areas with loads of camping gear. Additionally, the coronavirus outbreak has fueled its popularity.

However, city parks and green spaces always say no to campers.

“It’s often at odds with protecting the environment,” Ma said. “It’s common to see people hammering tent nails directly into the grass. These nails are difficult to remove and they are usually left out. This destroys the ecology and leaves a headache for the maintenance staff.

But the voice of the people was heard.

Plank bridges were provided at Yaohua Waterfront Greenland for people to pitch tents.

“The cracks in the planks hold the nails of the tent perfectly,” Ma said. “It improves the local environment while meeting the needs of the public.” 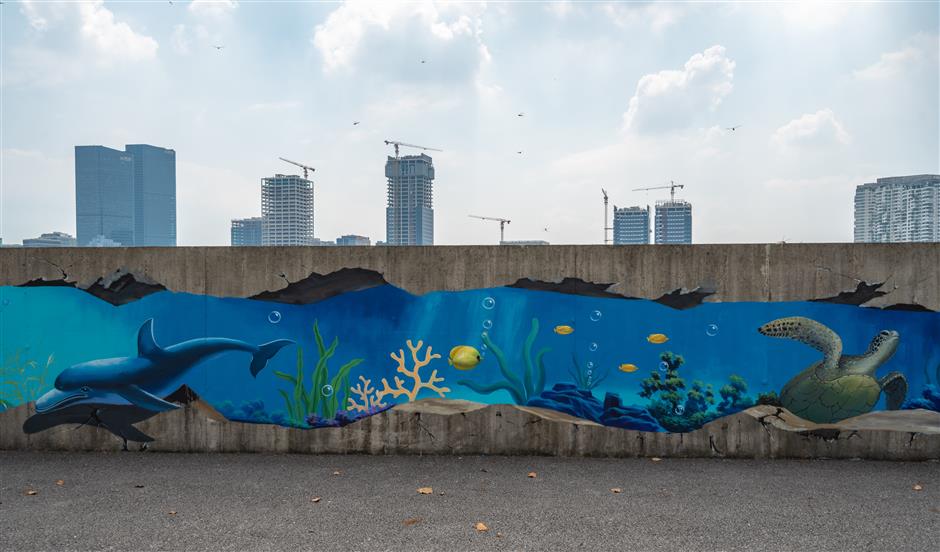 Graffiti on an anti-flood wall.

“We hope there could be more places like this in downtown Shanghai,” she said. “My family loves urban camping. But before that, we had to travel a long way to Lingang or Songjiang in the outskirts to pitch tents. Now we don’t have to go.

“What’s best is totally free,” she said, with a thumbs-up.

“Today we need such outdoor places because it is better to stay in Shanghai as the coronavirus persists,” she added. “It gives us a new option and adds novelty value.”

The greenery forces campers to make an appointment in advance via its official WeChat. Details such as the don’ts list and parking information are shown.

“They must fill in their names and cell phone numbers, and choose a location and period,” said Zheng Huanjing, an official from the Pudong Ecology and Environment Bureau. “We open from 8 am to 6 pm Barbecues and sleeping in the street at night are prohibited.

“In addition, we disinfect the site regularly and check user temperatures and health QR codes. “ 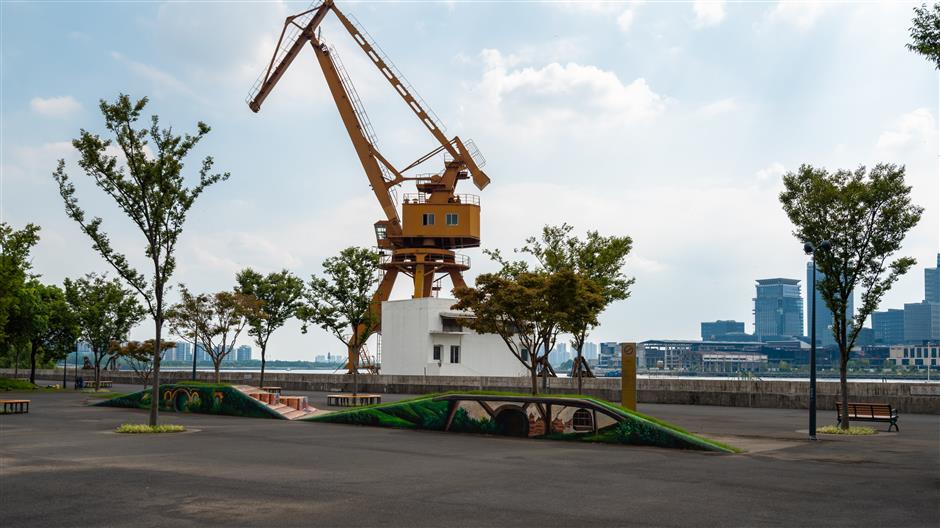 Graffiti decoration on the ground floor

According to Li, they prepared fruit, snacks, and garbage bags to take away the trash.

“We hope that campers can bring food on their own, although there are also vending machines,” he said. “And they are required to clean up the mess after using the site.”

But it is true that there has been sporadic uncivilized behavior, the office notes, giving examples of riding a bicycle on wooden paths, anchoring hammocks to trees, trampling on plants and setting up. of tents at other people’s sites.

Countermeasures will be taken, but for sure more green space by the river will open up for tents, he said.

Now the city is writing waterfront bylaws and it’s done soliciting public opinion. Concerns such as setting up tents, dog walking, and fishing are included. 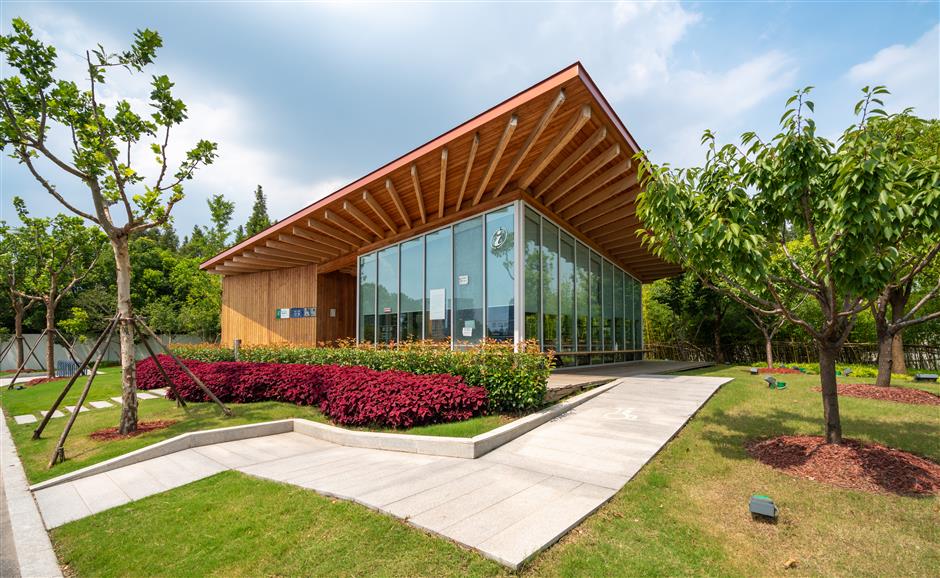 A livelier waterfront in Pudong

Pudong envisioned a dynamic river view in its 14th five-year plan (2021-2025) for riverbank development along the Huangpu River.

According to the plan, over the next five years, it will open 7.3 kilometers of waterfront space to the public, in addition to the current 22 kilometer section.

Millions of square meters of green space and public space will be available, highlighted by the Expo Culture Park, which is expected to be the largest green space in downtown Shanghai when completed by the end of 2023. .

Covering approximately 2 square kilometers, it will include a Chinese-style garden where traditional operas and artistic performances will be staged and an interior garden located in a renovated factory.

These attractions will create a “natural landscape” in the concrete jungle by building hills and streams, rising to a height of 48 meters, said Chen Zhu, deputy general manager of the park construction company. 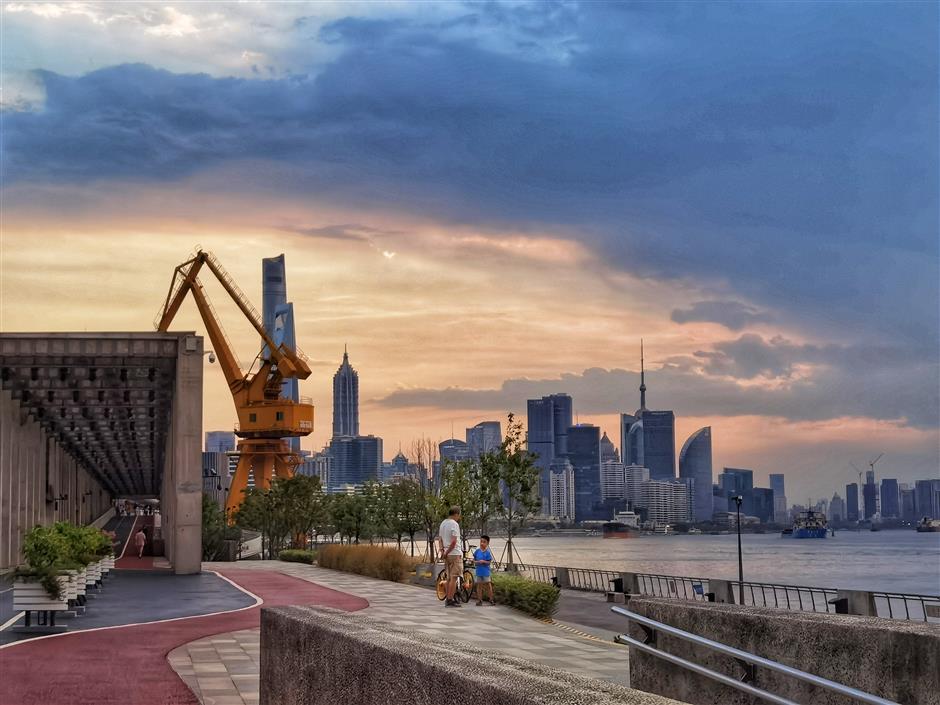 A child and his grandfather relax in the Minsheng Wharf area.

More surprisingly, Pudong plans to build cable car lines over the river and cruise terminals on Minsheng Road, the former Expo site, Qiantan area and other sites, taking people to the parks, cultural heritages and shopping complexes on its shores.

Meanwhile, nearly 150,000 square meters of historic industrial heritage sites, such as the Yaohua Glass Factory and No. 8 Xiepu Road at Minsheng Pier, will be renovated.

They will retain their historic flavor to showcase the city’s distinctive past and will take on a new lease of life as modern facilities for hosting parades, new product launches and other trendy interactive events.

Sun Yu, deputy director of the Pudong Culture, Sports and Tourism Bureau, said culture is the soul of a city.

“As the local GDP has grown, we are now focusing more on meeting people’s cultural demands,” he said.

“Pudong already has many interesting attractions on the waterfront. Now we hope to organize more parties, shows and concerts, among a variety of activities, for people to stay. We hope to make it a world class meeting place. 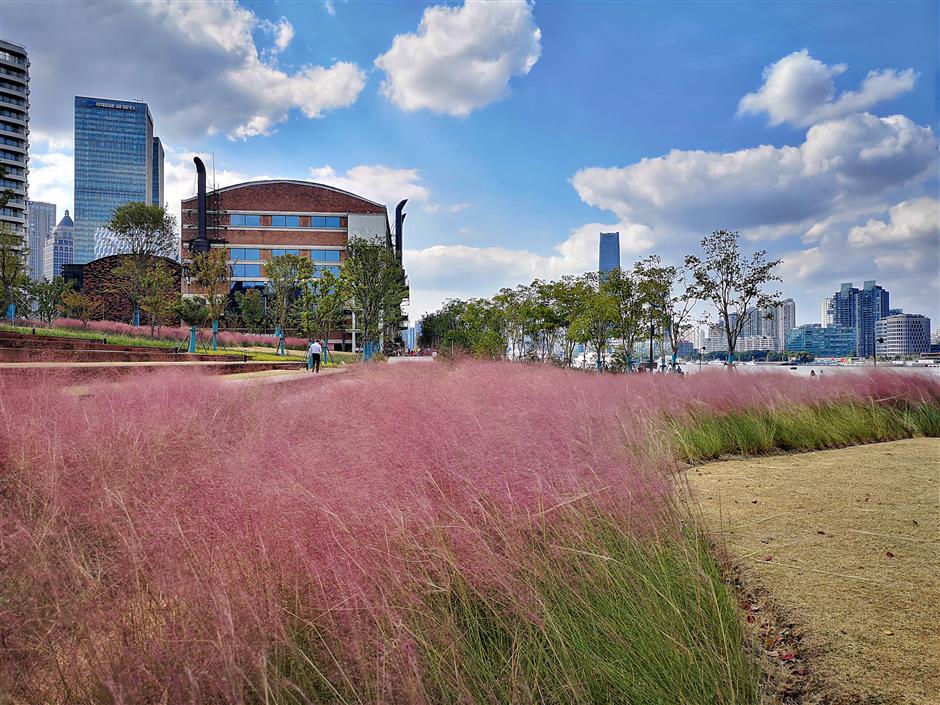 Pink grass is in full bloom around MIFA 1862, an artistic commercial space transformed from an over 150-year-old shipyard in Lujiazui.